Freesia - Behind Every Great Change, There’s A Woman
6 Outstanding Actresses To Look Up To


Behind Every Great Change, There’s A Woman
1140 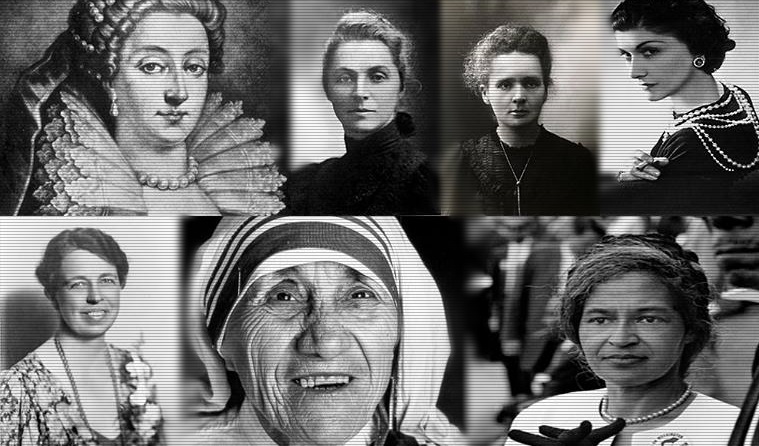 
History is full stories and legends about the heroes who made a change to this world. Just like those well-documented men, women had their own contributions to make this world a better place. Since a very long time ago, certain women have decided to be the world leaders not their wives.

Coco Chanel
As the European lifestyle changed following World War I, the world of femininity needed a courageous spirit to break the rules and redefine the existing fashion trends. Gabrielle Chanel, aka Coco Chanel, was the savior who freed women from corsets and feathers, and brought them the outfits that perfectly fits their new practical activities and liberated spirits. Chanel created comfortable designs mainly made of jersey, which was previously restricted to men. For her unprecedented contributions, Chanel is regarded as a fashion revolutionary!

Elizabeth I
Just like Chanel, yet in a completely different field, Elizabeth I redefined the political concepts and applicable protocols. You might be fascinated by her captivating, dignified appearance and unique beauty, however Queen Elizabeth I or Bess is mostly known for being the virgin queen who insisted not to marry and to rule her country by herself during a very controversial period, leading the country to be one of the world’s super powers.  Having the slightest chance among her siblings, Elizabeth I reigned for 45 years, a reign which is widely named as the Golden age.
Despite being fought internally and externally, especially the long war with Spain, Elizabeth I exerted her ultimate efforts to let the country stabilize and prosper economically, socially, and even literally it was the age of Shakespeare and Ben Johnson.  No Wonder, her people still calls her as Good Queen Bess.


Rosa Parks
Can a simple act of bravery in your daily life change the destiny of a whole nation? This would likely happen, if you were Rosa Parks.
Rosa Parks is the woman who refused to give up her seat to a white man as the laws and regulations dictate. She was then arrested and fined for violating the rules. Thanks to her courage and bravery, a powerful movement was initiated by African Americans, along with Rosa Parks herself, to claim their basic civil rights.  In 1968, Racial segregation was successfully ended in terms of applicable laws, when Civil Rights Act of 1968 was issued, putting as end to any kind of discrimination based on race, color, religion, and/or origin.
“You must never be fearful about what you are doing when it is right.” said Rosa Parks. With this spirit, Parks literally broke the rules!

Mother Teresa
Don’t let her tiny weak body deceive you, Mother Teresa is undoubtedly one of the strongest figures along the history, proving that strength is not necessarily associated with muscles.  While the world was torn by wars, Mother’s Teresa’s real weapon was love.
The 18-year-old Theresa decided to leave her family home and joined a community of nuns. Then, in 1931, she was sent to India where she took her initial vows as a nun. However, the kind-hearted Theresa went beyond the call of duty when she realized all the suffering and poverty outside the convent walls where she taught. Since then, Mother Theresa devoted herself to working among the poorest of the poor in the slums of Calcutta. Despite being fundless,  she started an open-air school for slum children. Theresa also started the “The Missionaries of Charity” to provide orphans with love and care. This society, then, expanded all over the world, providing effective help to needy people.
Mother Theresa received a number of awards, including Nobel Peace Prize in 1979. “It's not how much we give but how much love we put into giving.” said the Ambassador of Love.

Emily Murphy
While women are still fighting for their axiomatic rights, many others fully and freely enjoy such rights. However they owe this freedom to a number of courageous women how had the guts to overcome all restrictions. And Emily Murphy is absolutely one of these women. Murphy was a self-taught legal expert and Canada’s first female magistrate, who fought tirelessly, along with other four women against ruling stating that: women shall not be considered legal persons. After 12 long years of fight, they gained that right for her fellow women and Canadian women could then enter the Canadian Senate. “Nothing ever happens by chance…Everything is pushed from behind” said, Emily Murphy.

Marie Curie
The world is undoubtedly grateful for Einstein, Alfred Nobel, and Thomas Graham, however the world should not be less grateful for a prominent scientist, such as “Marie Curie”, one of the most famous and successful chemists and physicists of her life time.  Along with her husband, Curie discovered two new chemical elements: Polonium and Radium. For such a discovery, they received A Nobel Prize in Physics, in 1903. In 1911, Curie received another Nobel Prize in chemistry, and she was the first person to receive Nobel Prize twice.
Curie also played a crucial role in the development of X-Ray in Surgery, and she even helped to equip ambulances with X-ray equipment during WWI. Given that the 20th century is the age of science, Curie is, then, a typical 20th Century fighter.

Eleanor Roosevelt
No wonder why the world still remembers and honors the long-serving US president Franklin D. Roosevelt, the man who led his country to a glorious victory during WWII. Nevertheless, the world is not less grateful to his wife, Eleanor Roosevelt, who was far from the typical US protocol-abide first lady. Having been called “the president’s eyes, ears, and legs”, Eleanor Roosevelt traveled throughout the country, visited ongoing projects, and reported to the president. She even gave speeches and made conferences on his behalf. After her husband’s death, Eleanor joined the United Nations, and served as Chair of Human Rights Commission. Since then, she worked tirelessly to draft the Universal Declaration of Human Rights, issued in 1948. For this reason, among others, E. Roosevelt is remarked as “The First Lady of the World”.

Every woman is born to be a fighter, whether as a mother, an activist, an innovator, or even a ruler. These are just few women, among many others who insisted to make this world a better place, demonstrating that all you need to change the world is creativity and determination.